If you know bobcats, you know that these animals are shy and elusive.

Can you tell one apart from other North American predators?

In this post, we will take a closer look at the bobcat and learn more about this fascinating creature.

What Sounds Do Bobcats Make?

There are several sounds that bobcats emit during mating season or when they are fighting over territory.

The most common call of the bobcat is a yowl, which is an eerie sound that can be heard for miles.

This cry lasts three to four seconds and ends with two short screams.

Both genders of the bobcat will also growl to warn others of their presence or to intimidate any rivals they may have. (source)

A high-pitched hiss is another warning sound that bobcats use when they feel threatened.

And finally, kittens emit a high-pitched mew, which is used to call their mother.

What Are Bobcat Hunting Sounds?

Since bobcats are carnivorous predators, they hunt other animals in order to survive. (source)

There are a few different sounds that bobcats make when they’re pursuing prey.

Typically when a bobcat is stalking its quarry it will emit a high-pitched bark.

This sound is often followed by several quick chirps before the yowl begins.

The bobcat will also emit yowls during the mating process, but this sound is much different.

A bobcat’s mating call can be heard echoing through forests up to a mile away.

Bobcats are most active at night, which means that most humans rarely encounter them in their natural habitat.

Bobcats are often mistaken for other predators due to similar vocalizations.

The most common predator that is confused with the bobcat is the lynx.

While these animals have several calls in common, there are distinct differences.

The lynx is larger than the bobcat, so its yowls are lower-pitched.

Additionally, the male lynx’s mating call lasts up to 20 seconds and can be heard for over one mile away.

If you hear a long meow followed by several short ones, it is more than likely a bobcat.

Why Does A Bobcat Scream?

The quick answer is that bobcats scream to communicate.

But what does that mean? Like all animals, bobcats use vocalizations to express themselves and communicate with other members of their species.

This can be anything from a simple meow to an ear-piercing screech.

Each sound has a different meaning and purpose.

What Does A Bobcat Scream Mean?

There are a few different reasons why a bobcat might let out a scream.

For one, they might be trying to scare off predators or humans who they perceive as threats.

Bobcats are relatively small cats, and they’re not well-equipped to defend themselves against larger animals.

So, by screaming, they’re trying to intimidate their enemy and make them go away.

If a bobcat is feeling threatened or wants to assert dominance, it might let out a loud scream.

This scream can also be a warning to other animals to stay away.

Next, bobcats might scream simply because they’re happy or excited.

They might let out a celebratory screech after catching prey, for example.

So, there are a few different reasons why a bobcat might scream, but all of them boil down to one thing: communication.

Bobcats use their screams to express their feelings and communicate with other members of their species.

And that’s pretty interesting when you think about it.

Why Do Bobcats Scream In The Summer?

This won’t be anything more special than the other reasons listed above.

The main reason is still to communicate.

During the summer, bobcats might scream to let other animals know that they’re around.

This is especially true if the bobcat feels like its territory is being threatened.

So, if you hear a bobcat screaming in the summer, don’t be too alarmed.

It’s just their way of communicating.

An angry bobcat doesn’t sound any different than a regular bobcat, except that it’s likely to be louder and more aggressive.

If you’re in the vicinity of an angry bobcat, you’ll probably know it.

Its screams will be louder and more intense, and it might be more inclined to attack.

So, if you hear a bobcat screaming and you’re not sure what it’s trying to say, it’s best to err on the side of caution and assume that it’s angry.

After all, there’s no reason to take unnecessary risks.

A baby bobcat has a very different sounding than an adult bobcat.

A baby’s cry is much higher pitched and more shrill than that of an adult.

In fact, it is so high-pitched that it can be difficult for humans to hear.

As they get older, the cries become lower in pitch and are easier for us to hear.

This is likely an adaptation that allows the parents to better locate their young in the dense underbrush.

What Are Bobcat Mating Sounds?

Bobcats are most vocal during mating season when the female bobcat starts to yowl in order to attract a potential mate.

This cry can last several minutes and is often heard up to two miles away.

Since the female bobcat is not in estrus throughout the entire mating season, her yowling will change depending on her level of fertility.

The most sought-after mates are the dominant males who will work hard to attract females that are in estrus.

The exact sound of a female bobcat’s mating call can vary depending on which region she is living in.

Most females’ yowls end with several short screams, while others end with an extended hissing noise.

Unfortunately, very little research has been done on the mating sounds of bobcats.

However, many scientists agree that these calls are mostly instinctive rather than learned.

This means that your local bobcat probably won’t learn any new different mating sounds from another population.

There are a few sounds that bobcats make outside of the mating season, and they’re typically quieter than the yowls made during this time.

Since these animals are nocturnal, you’ll hear them most often at night when their prey is active.

A bobcat’s growl is much more guttural than a domestic cat’s. (source)

Also, bobcats don’t always make these growls; they will only emit this sound when they feel threatened.

If you hear a series of chirps followed by two yowls, it’s likely that the animal is engaged in mating season activities or claiming its territory.

How Bobcats Shriek in the Night?

If a bobcat feels threatened or is acting in an aggressive manner, it will often emit a high-pitched shriek in order to intimidate others.

These animals have been known to scream when they’re close to being cornered by a human or another animal.

Also, since females are not always in estrus, they emit these shrieks to attract potential mates.

This is especially common during the spring mating season when the female bobcat will yowl for several minutes at a time.

Bobcats also scream after they’ve made a kill because it’s their way of marking their territory.

This sound is often accompanied by the animal’s tail being twitched up and down.

What Type of Howl Do Bobcats Make?

Bobcats make a variety of sounds to communicate, including growls, hisses, and even purrs.

However, their most distinctive sound is the howl.

Since bobcats are typically nocturnal animals, these howls are most often heard at night when the prey is active.

Bobcats howl to communicate with each other over large distances.

Males will even use this sound to find females in estrus and warn off other male predators that may be encroaching on their territory.

These calls can travel over one mile away, so bobcats will also use them to find each other if they get separated.

How Many Different Howls Do Bobcats Make? 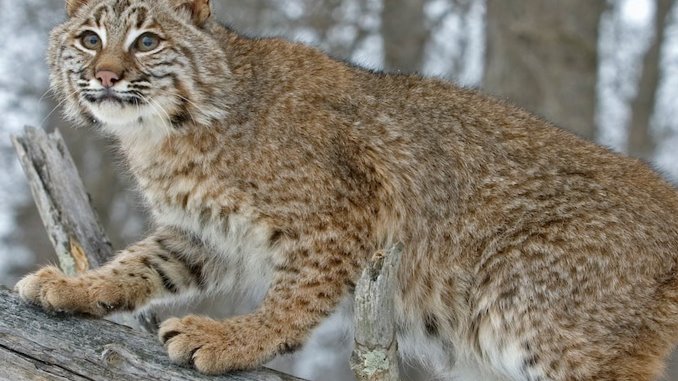 Bobcats make a variety of howls, and each sound has its own purpose.

Here is a list of the most common sounds bobcats make:

The caterwaul – an insistent and plaintive wail that rises and falls in volume; this sound is made by females in estrus

The group yowl – a loud, drawn-out howl that sounds like a wail; this sound is made by males to find females in estrus

The chattering whine – composed of rapid, plaintive yelps that are accompanied by tail vibrations and ear flattening

The scream – a shrill clamor that sounds like a baby’s cry; this sound is made by bobcats that are cornered or being attacked

The snarl – an aggressive, high-pitched noise that sounds like a sneer; this sound is often accompanied by the animal’s baring of teeth

Bobcats make a variety of sounds to communicate with each other, and each sound has its own purpose.

The most common sounds that bobcats make are the caterwaul, group yowl, chattering whine, scream, and snarl.

Each of these sounds serves a specific purpose for bobcats, such as attracting mates or marking territory.

Bobcats will also howl at the moon during the spring mating season because prey is more active on these nights.